Let Us Pay You To Create : How 1 Bristol creative discovered her own style.

The last of our four creatives was Emma Blake Morsi. Emma is an award-winning multi-disciplinary producer, she predominantly works across photography, words, graphics, film and events, and has been training as a creative intersectional environmentalist.

Emmas Expectations for Let Us Pay You To Create

We started our conversation by discussing Emma’s expectations for the week. She told us that she was really excited, to be given such a big amount of time to develop her practice. “Having so much time to work on your own projects is so rare, and so I set myself a really ambitious list of things I wanted to achieve. There were lots of things i’ve always wanted to explore, but have never had the chance to because often, I have to put my commissioned work ahead of personal projects (for obvious reasons).”
She explained that she set herself one or two briefs of things she wanted to achieve, but went on to tell us “I think you often forget how little time there actually is in a week, so it was really a case of managing my own expectations and prioritising the things I wanted to do most!”

We wanted to know if Emma went into Let Us Pay You To Create with a structure for how she wanted to use her time
“I was super open, I had vague ideas of things I wanted to do. I knew I wanted to explore digital art and using my graphics tablet more, but ultimately I wanted to use my week to research and develop new skills, for me it was 100% a time for learning”

What did Emma do as part fo Let Us Pay You To Create?

Emma told us that in her week she spent the first few days looking at tutorials and starting to learn some new skills. “Then I practiced, trialing out what I’d learnt and just creating some really ugly work! stuff I wouldn’t necessarily be super proud of but just trying my hand at new things” She told us this was a nice way to learn and upskill herself .
After the initial period of experimentation, Emma said she started to put that learning into practice and began to focus on one final piece. She told us that this piece has catalysed a new way of working and a design style that she has been able to feed into new commissions she has worked on since the end of the project too. 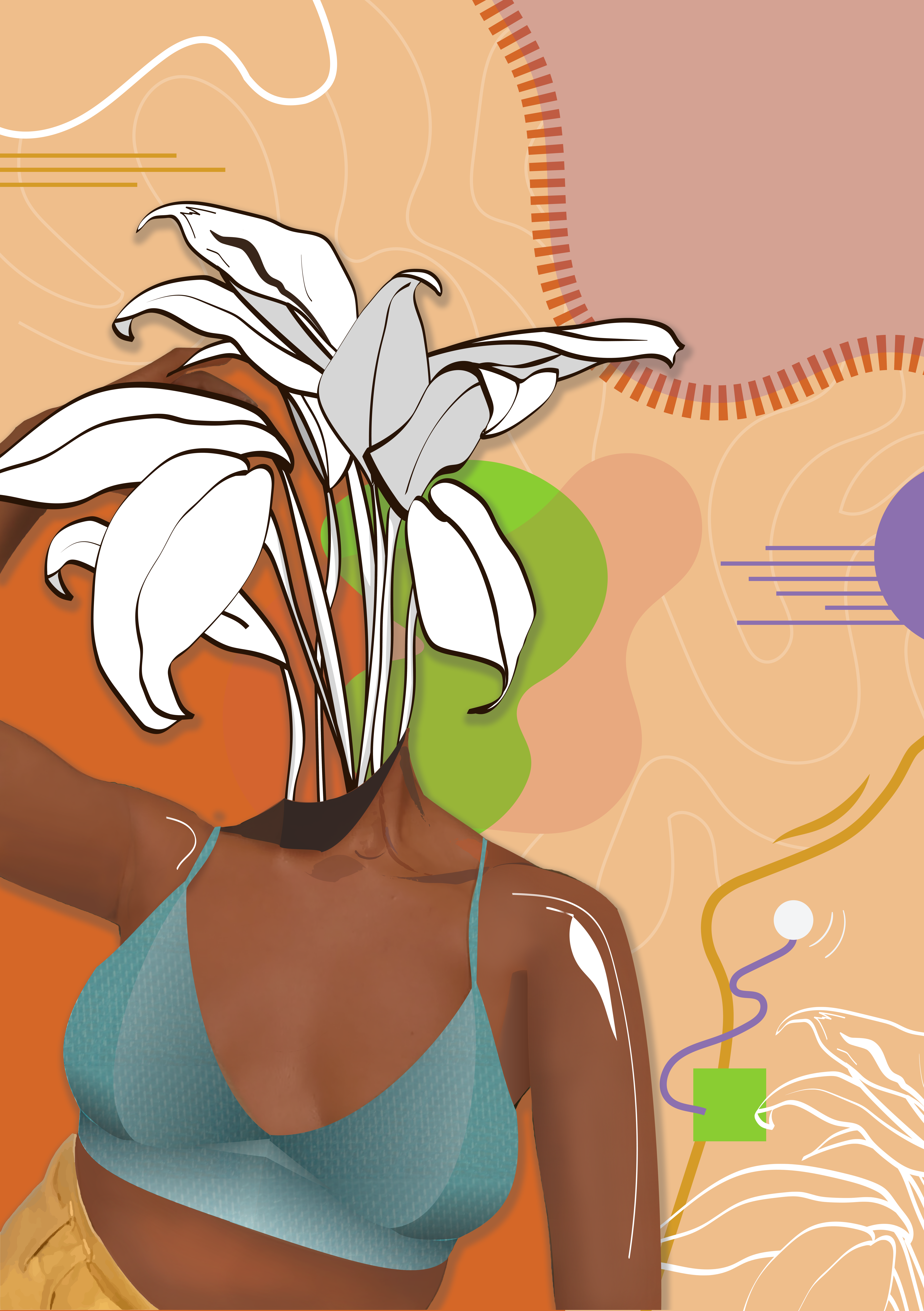 As part of the award for Let Us Pay You To Create, each of our four creatives was given a materials budget of £100 to spend on something that they wouldn’t normally be able to invest in, we were itching to know what Emma had spent hers on!
“I spent my materials budget on a wacom art pen which allows me to produce much more organic lines, it was great to have some time to understand how to use it, it’s been really useful in my practice and it was cool to be able to invest in something that will be helpful in years to come.”

How did Let Us Pay You To Create compare to a normal week ?

We wanted to know how her week on Let Us Pay You To Create compared to a normal working week for Emma, she explained “I work part time as a freelancer, and I am also content and partnerships producer for an ethical pr company, so a lot of what I normally do is based around briefs that are set for me.”
Thats why, she told us, that it was so nice to block out time to focus completely on her art, “normally there is a lot of admin involved in my day to day, but it was really valuable to have time to prioritise things that im not usually able to. For me it was so incredible to really focus in on that, a normal week wouldn’t allow for that amount of reflective upskilling and personal development.”

What did Emma learn on her week on Let Us Pay You To Create?

We were so happy to be able to give creatives the space to explore their practices for an extended period of time, we know from experience that having this space can really help us to learn new things about ourselves, we asked Emma if there was anything she had learned on her week in Let Us Pay You To Create.
Emma mentioned that the biggest thing she learned was what kind of work she enjoys making. “It helped me to realise that although my design style is very versatile because it helps me in my jobs, I haven’t had so much of an opportunity to explore what I felt was a strong design language that I could create for myself, having that opportunity on that week was very valuable. For me it feels like i’m starting to understand the way in which I can approach my projects to create work that is a lot more coherent.”

Emma also told us that it was really exciting to be able to meet the other people on the project, to see where they got their inspiration from and to see how they were approaching the week. “It was really refreshing to speak with other local artists and creatives who were just doing their own thing, it was really valuable to be able to create that network.” At PAPER Arts, creating this nurturing network is something we are so passionate about, as we know how isolating the life of a creative can be, so we were really happy to be able to facilitate this for the creatives on our project.

Whats coming next for Emma?

What’s next for Emma, we hear you cry, well, she told us that she has really felt the effects of the work she did in this week carry forward to the next projects she has done “ I have a really exciting billboard commission thats going up soon which is all based around climate change, i’ve also just done a commission for a colouring book which is due for release this month.”
We can’t wait to see your new projects Emma!

You can check out more of Emmas work here.

Pride Month: How 1 Activist Has Created Queer Community In Bristol