Pride Month: How 1 Activist Has Created Queer Community In Bristol

and as a proud LGBTQ+ led organisation, PAPER Arts is very excited to be able to bring you a month of curated queer content, profiling some amazing work coming out of Bristol, by queer artists and members of the community.
We spoke to Sharifa Whitney- James, best known for founding the QTIPOC community organisation Kiki Bristol. We sat down with Sharifa to discuss her experiences as a Black queer woman in Bristol, why building communities is so important and how Black joy should play a bigger part in the conversation.

Who is Sharifa Whitney James

Sharifa is a true multi-hyphenate, with a career that spans community work, modelling, facilitation, consultancy and much more. She told us that everything she does is always centred around queerness -“that, and working with more marginalised groups like black or POC folks, queer, trans folks and non binary folks” she added. 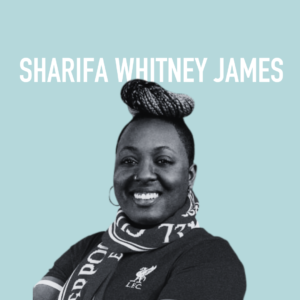 How to define Queerness

We were interested to know how Sharifa defines queerness. She told us “it runs so deep and there are so many different facets to it, but I think, for me anyway, it’s kind of about being unconventional, and fighting against the system that has always tried to make us think one way.”

Sharifa told us how important it is for her to decolonize her mind around what queerness looks like, what blackness is ,what being a woman is and what gender is. “We’re so taught to think that Black isn’t beautiful, or that you must be a white skinny, androgenous person to be queer.”

The power in being visable

That’s why Sharifa chooses to live her authentic life so unapologetically. “Being visible is so powerful in itself. There aren’t many of us who are out and Black and queer.” “It’s not that common to see someone as loud and as brash as I am about being Black and queer. I think it’s important because, you know, it’s good to see difference.”
Sharifa shared a quote by Nikita Gill which summed this up perfectly; “Your ancestors did not survive everything that nearly ended them for you to shrink yourself to make someone else comfortable. This sacrifice is your warcry, be loud, be everything and make them proud.”

Sharifa spoke passionately about the importance of honouring ancestry. “I try to remember that I wouldn’t be here without my ancestors. A really big part of Blackness, and queer Blackness is remembering that there are people who were here before us, who paved the way and I think it’s really important to practice that even in our everyday lives, honouring that and remembering them”

We spoke about how keeping those conversations going with people of all ages is essential, perhaps that is why community building is so important to Sharifa’s work.
She told us that even after living in Bristol for years, she struggled to find a sense of community. “It feels quite grounding to have a sense of community, and to have people who kind of get where you’re coming from without having to explain yourself fully” and that’s why after conversations with the now defunct organisation LGBT Bristol she was introduced to a group of people who felt the same. 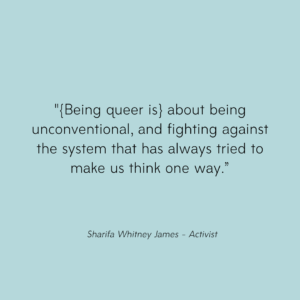 How Kiki Bristol was born

She explained that there wasn’t a space in Bristol for Black queer people to be able to go and feel safe, and thats how Kiki was born. “Our aim was to create a safe space for us to come to where there’s music that we like to listen to, not like Madonna, like R&B and Reggae, Dancehall you know, we want to eat nice food like Jamaican food – we want to have safe conversations about race and gender, without the white gaze.”

“We kind of set out to do a few nights, so the nights were kind of very loosely themed like having an open mic and having food and just bringing people together.” Sharifa remembered how the team had no idea if anyone would turn up to their first event – “We advertised that first one between friends of friends of friends, and we had about 12 people come, we were ecstatic about it!”

Since then, Kiki has grown and grown. Shafia told us about her proudest achievement with Kiki, a night they put on in Old Market with Bristol based DJ collective Booty Bass.
“We had such a great time laughing, dancing, it was amazing! It was such a nice mix of like random straight white guys from Devon on a stag night to loads of Black queer trans people dancing with their tops off and just having a whale of a time. It was such a beautiful wholesome space and mix of people, and I honestly think that has not been possible before – for it to feel safe and inclusive was just incredible!”

The mission for Kiki Bristol

The mission for Kiki now is to continue to exist in a city with a very white queer scene.
“We want to keep conversations going around black and POC queer folks, that we’re here and we’re queer and we’re here to stay, we want to influence other queer and LGBT groups and organisations around how they can better be inclusive of queer Black folks.”

Aside from her work with Kiki, Sharifa is in the midst of a new project, creating a podcast.
She told us “In The Blackity Black Queer Joy Podcast, I’ll be talking to Black queer activists from the community about how they find their joy. The past year has been awful, but more so for Black queer people and non-binary people. There has been a lot of heavy talk and I’m tired of having to talk about race all the time, so the podcast will be one place where we just talk about our joy and how we manifest it, and how we thrive even amongst the absolute shit that is going on the world”

We love the sound of that Sharifa, it’s amazing to hear how one person can do so much to bring joy to their community, it’s great to see!

You can keep up to date with Sharifa here, and why not follow Kiki too to see what events are coming up.